tanoshimini said:
The SIP panels that make up our roof are 12-1/4" thick. The EPS foam that cores the panels makes for some pretty good noise insulation. Our roofing goes up this coming Tuesday, but we've had some hard rain in the week since the panels have gone up. I went out to listen to the noise, and TBH, it's pretty negligible as-is.

I'm sure that the noise transmission will be minimal. An inverted roof using SIP panels is the way to go, no thermal bridging.
On our off grid build we used a product called Quadeck.
No noise whatsoever except on the triple glazed glass skylights but even that is very minimal.

RayfromTX said:
Where are you located?
Click to expand...

Mike 604 said:
I'm sure that the noise transmission will be minimal. An inverted roof using SIP panels is the way to go, no thermal bridging.
On our off grid build we used a product called Quadeck.
No noise whatsoever except on the triple glazed glass skylights but even that is very minimal.
Click to expand...

How big is the support structure for that roof? Looks very heavy.

interesting notes on humidity flow, thanks

RayfromTX said:
It is a good idea in a very cold climate to take serious measures to prevent interior air from finding entry into your sips. Interior water vapor will move all winter long through the joints towards the cold outer surface forming frost which can wreak havoc on the panels. In Alaska, some rather dramatic failures brought this to our attention though we have recognized for many years the need to stagger the seams on exterior roofing insulation. This isn't possible with sips so air and vapor sealing at the bottom plane becomes very important and the further north you go, the worse it gets. Assurances that it isn't a problem will not convince the physics at play if measures aren't taken or aren't effective. Also remember that wood expands and contracts a lot with changes in moisture so just caulking the joints as is prescribed may not be a long term solution which is what they discovered on hundreds of Alaskan sips structures. Just be aware and study up on it. buildingscience.com can help. Try googling alaskan sips failures or some such and see what you find.
Click to expand...

One of the ways to ensure that any moisture will dry up is to have an air gap with ventilation pipes in the roof. Air can circulate freely through that air gap drying moisture. This is how mine is done: 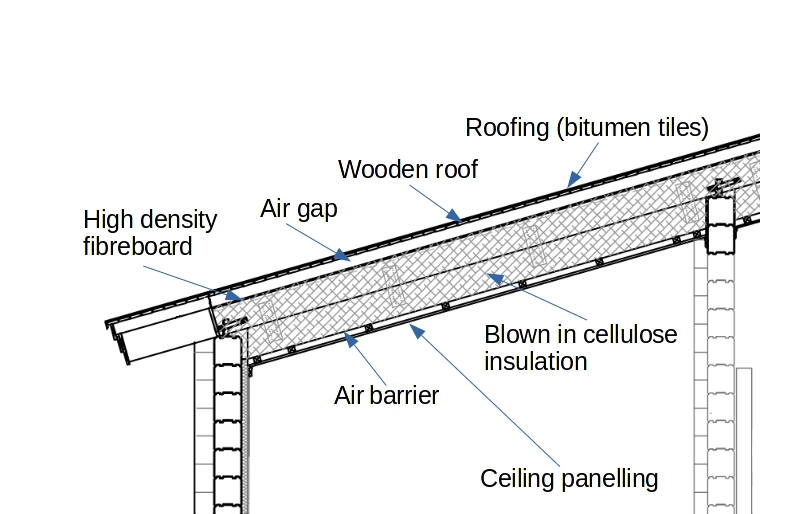 upnorthandpersonal said:
How big is the support structure for that roof? Looks very heavy.
Click to expand...

That's actually less than I expected. Do you have to take snow load into account where you are?

It depends of course on the climate - remember I'm very up north; this style of roof has been used for ages here without issues. In fact, there was a time when newer construction used other 'modern' methods and those places have tons of issues with mould now.

I wasn't arguing against you; there are a lot of things that one needs to get right, I agree. Maybe I shouldn't write replies in the middle of the night (it was 2:30AM when I wrote that).

Let me expand on that (I know you know these things). Cellulose is very hygroscopic, and you can use that to regulate humidity inside the building. This is why the air barrier is also specifically used so moisture can pass through. If you pick the wrong type of air barrier/moisture barrier (for example ) you end up with problems. Also remember this is a log house, so rain screens and continuous exterior insulation is not applicable.


RayfromTX said:
It can fail if the vent path is insufficient or if the vapor permeance of layers below the insulation exceeds that of the layer above. If the layer above is more vapor tight the moisture will collect in the cellulose and freeze and thaw repeatedly creating an environment for mold and rot in the fiberboard in spring.
Click to expand...

Fully agree with that, which is why selection of the air barrier as I mentioned is critical, in my case a material with water vapor permeability of 0.7 Sd.
Last edited: Nov 28, 2021
M

RayfromTX said:
Mostly people want a prescriptive guide that is easy to follow and easy to build and cheap. If I tell them what to do and someone else tells them something easier (not referring to this current discussion at all) then without the foundational knowledge, they will go with the easier cheaper method. I've spent the last 20 years trying to overcome this with paid degreed professionals so random people on the internet is definitely hit or miss.
.
Click to expand...

This is so true. Easy (fast)and cheap is never any good.
Been building SFH since 88.

Upnorthandpersonal, building is all concrete.

upnorthandpersonal said:
That's actually less than I expected. Do you have to take snow load into account where you are?
Click to expand...

I don't even pretend to know what it all means, but we had an engineering firm spec everything and wet-stamp the plans. they insisted that it was over-spec'd for the area and conditions.

they were more concerned with the wind-loading on the long sides, actually, since the building is long and narrow (66x24). so they had us convert three walls to 2x6 shear walls with a haunch in the slab, bolts every 16", etc.
S

reg said:
Yes, I have a seasonal home on the bank of a salmon river in Newfoundland. The river bottom is rock, and there's a mountain, only a few inches to rock, directly behind me. The soil for our garden was trucked in. It's been years since I've looked at our root cellar, built many decades ago, so I can't provide details on its construction. However, at one time it would have been critically important to getting through the winter, and I have no doubt that it works.

The root cellar in the photo below is in Elliston, a town 30 miles north of me that bills itself as the "root cellar capital of the world". Hey, apparently a lot of tourists are interested in root cellars I'm sure that the person who co-ordinates tourism in Elliston could tell you everything you want to know about how to build one. Link, including more photos: elliston-the-root-cellar-capital-of-the-world

Fun fact: Cape Bonavista, just a few miles north of Elliston, is where many people believe John Cabot/Giovanni Caboto, in 1497, first made landfall in North America. That said, it's probable that the Basques were fishing for cod off Newfoundland well before 1497. Indeed, it's been suggested that Cabot may have gotten the route from Basque fishermen.

I’ve had similar thoughts regarding job boxes. Nice to see you put it all together.

A couple of thoughts for your consideration. As you may know, Mylar on the foam only works if there is an air space. I’m surprised you used it given all the electricity involved. And there have been some issues regarding the grounding and neutral bonding approach used in European inverters. Not sure it applies to your situation but something to be aware of.
S

tanoshimini said:
My situation is, well, a little weird. We bought a 100+ acre chunk of raw forest, that had as it’s only existing infrastructure a stubby stretch of 150’ of driveway. If we were retrofitting batteries into a place that already had some existing buildings, amenities and such, I’m pretty sure that I’d be doing exactly as you suggest. It’d make more sense. We didn’t know exactly where we were going to build at first, so we needed to be able to use the batteries (and move them around) well before we’d have the ability to bring in a cement truck, so insulated job boxes made more sense for us. Once we decided on a site and had built some driveway, we gave them a slightly more permanent home. We’ve setup a 20x12 ShelterLogic as a workshop on our build site (down ~950’ of driveway), and have it wired up with lights, outlets and it runs our (220v) well pump. We keep it charged right now with a really simple 2x4 ground mount, and three 375w panels, though we started off by using a little generator.

Next year, we plan to put up a fairly large permanent workshop. The batteries will be moved into or adjacent to the building (but under a roof) at that time. We don’t anticipate leaving them fully exposed to the elements beyond this year. So far, so good, though. Nothing has gotten wet, dirty, or infested by bugs or furry things to date.

Righteous! LTO batteries make a lot of sense for emergencies, since they can be left unheated and still be used. We’ll be looking into something similar for our emergency system.

We’ve been running our Quattro on 16s (NMC) @ 60v nominal without issue all year long. “Full charge” for us is 64v (4.0v/cell). We monitor the Quattro daily and haven‘t had a single warning / error / trip. We’re on the latest firmware, and haven’t done anything to the unit that the VictronConnect app won’t let us do. So, one data point.

We’re still building the house, so we’re mostly running large power tools, pressure washers, lights and the well pump off the system right now. Everything has been functioning well and without complaint. If past is prologue, I don’t see any significant problems cropping up as we add more panels and more loads. We’ll see!


Thanks! I‘d love to hear more about your setup.
Click to expand...

Tanoshimini: How are your 16s cells faring? I'm still looking for the right solution for my prismatic cells, which if left unchanged would be 8s/16s. Also have some 12s I might want to modify to get that voltage up.

I need to understand, and verify what happens with the voltage curve and life span of prismatic SDI cells when you charge to a lower threshold, like 4.0 volts.

We had super violent storms last year, and the result is that we are still rebuilding on our properties. Just about everything we were working on has to change either due to roof damage, code changes, new purchases, etc. We were also building a greenhouse, and that blew away. I was only looking at ground mounts, but now due to insurance, and rebuilding, we are actually getting permitted for roof mount, and grid tied.

However, I'd like to move, and pick up about 10-20 acres. With material shortages being what they are right now, it could take us a year to 2 years just to fix some of the damage, so it might not make a lot of sense wasting peoples time looking at properties in other States until this all shakes out. I'd like to drill down on the 16s issue, because that would make things a lot easier for me if the consensus was that it is a good idea.

Just one last comment: I found a local contractor who deals with a lot of UPS systems, cell towers, banks, data centers, etc. He had a small warehouse full of Eaton and Siemens switch gear that they were scrapping out. Lots of battery racks, cabinets, fans, transfer switches, etc. A lot of it is 480v though, so just keeping that in mind for future projects. Some of those UPS systems are full of heavy copper cabling though, some with 12v and 24v batteries.

Good luck with your project!
You must log in or register to reply here.