MrM1 said:
If you've not ordered cells yet, start a conversation (this forums method of a PM) with @Michael B Caro at the LFP Buy Group. I think he can get a verity of sizes and becomes Ur middle man state side to China. He would help with any issues and had the best price I could find.
Click to expand...

Don't mind spending a little more on a middleman ... sounds like he is worth it

I have done this - with 1 BMS and 8S2P. It is the best way to go - instead of two paralell banks. There are a few things in paralell LiFePO4 banks you need to be cognizant of (maybe you already are).

2. In charging and discharging the banks they will change overall cell voltages between them even with balancing. One bank will want more power when the other one does not and vica versa with discharging. You will have to either bottom or top balance these banks and try and get them to the exact same SOC before you install them.

3. There is some good literature out there about running two LiFePO4 banks together and connecting the BMS' together through a serial connection - then they share the data. I have seen this on advanced BMS systems that are pre-made and the batteries put together. It means one of the BMS becomes primary the other one secondary - with the primary one controlling balance voltages. This is done on large racks of batteries that are in very large UPS systems with an RJ45 connection between them.

4. The resistance of each cell will change over time. Go back to 2 above.

5. There is also some great advice out there about not running the banks at standard low voltage settings and having to adjust them based on number 1 above. Most of the advice I have read says to ensure you are at about 30 to 90 percent SOC on your charge and discharge cycles, set the low voltage to the lowest cell for both banks, watch the charge cycles carefully and monitor the banks more frequently than you would an 8S2P.

Coming off the 8S2P 24V 200AH battery bank with the OKS BMS I had no issues except the loss (over time - 2 years) of resistance in one group of cells in the 8S configuration. This created a charging issue as the low resistance cells would ramp up to 3.65v way before the other ones got even close. I just deconstructed the battery and created 3 12v batteries from the remaining cells and ordered 8 X 280AH EVE cells to rebuild the bank.

Lastly, over the past three or four years building an off grid system, I have learned a lot. The biggest lesson I learned was to have a second bank of Lead Carbon (Great Batteries) available. This allows the system to continue to supply power while you re-configure, repair or re-construct the LiFePO4 bank. Also look at year round temperatures and make sure you have a battery heating system on the LiFePO4 system. We do not use the off grid system during the winter months and so keeping the LiFePO4 batteries from freezing is important. We also leave the system on the Lead Carbon bank over the winter months - they are much more resilient than the LiFePO4' are.

Not meaning to argue with you just sharing my experience.
J

As far as I know right now this will be my configuration. (except I'll use 175 amp fuses instead of 200)

Hello. Just joined the forum and quickly found my answer regarding a 24v 16cell LifeP04. The above diagram confirmed my design and decision to wire up two separate 24volt batteries with two BMSs.

Quick question, currently I'm using a 24v inverter but have plans to upgrade to a 48v down the road. I'm assuming I would need to replace the BMSs when reconfiguring the battery to 48v. Since I have not purchased my BMSs yet, I would like to know my options considering a planned future upgrade to a 48v inverter. thanks,

I think yes. A 24v bms would not work with a 48v inverter

jjhdtv said:
Hello. Just joined the forum and quickly found my answer regarding a 24v 16cell LifeP04. The above diagram confirmed my design and decision to wire up two separate 24volt batteries with two BMSs.

Quick question, currently I'm using a 24v inverter but have plans to upgrade to a 48v down the road. I'm assuming I would need to replace the BMSs when reconfiguring the battery to 48v. Since I have not purchased my BMSs yet, I would like to know my options considering a planned future upgrade to a 48v inverter. thanks,
Click to expand... 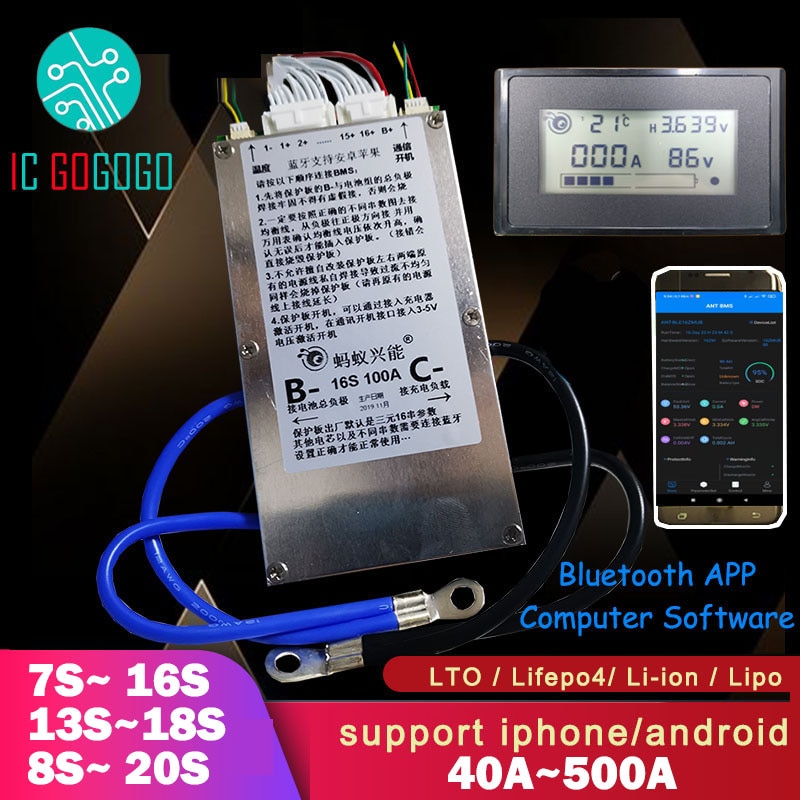 Warning: The ANT BMSs are listed at their peak amps. As an example, the 8S to 20S 400A model is only rated at 150A Continuous.

Whew. Finally getting cells tomorrow. Will start top balance after I build the compression frames.

This is a simple Unboxing and First Impressions of "EVE" 230Ah batteries I received from Doncan Technology (Shenzhen) Co seller @Amy Zheng. Purchased from their TX warehouse shipped to FL. I do not pretend to be as informed and knowledgeable about LFP batteries and their purchase as many people...

Well this is how it's coming out. Got one bank of 8s put together today. Will start on the other 8 cells tomorrow. I know I probably should be doing 2p8s in one big pack, but Overkill Solar did not have a BMS that would handle my loads of 175 amps without using 2 BMS. I Could parallel the BMS, but I do not think that is recommended by Overkill..

Anyway, here is what it looks like so far.

Got all 16 placed in the battery box and all the new wiring done. Fuses installed. The set up will be 8s2p and 2 Overkill Solar BMS units.

Everything is live and active and I plan to charge the two 8s banks up to about 3.45v per cell or so and then break the whole thing down and top balance, and then arrange the cells according to voltage and weight in the final two 8s packs.

Ok so I'm charging and checking.

I have the Bluetooth app for the two Overkill Solar BMS units loaded on 2 phones, so I can monitor both series banks at the same time.
I also have a clamp on Kline Tools DVM

Everything is agreeing. Charging at 26.9v. Cell deviation is about 0.009v for all 16 cells

AND... the amps going into each series bank is less than 0.5 amps off. So I'm pretty happy with the charging parallel distribution of amps between the two 8s banks

My plan is to Top Balance on Monday with a 10 amp beach power supply once I get to about 3.45v per cell

Finally got all 16 cells Top Balanced. Did 8 cells each in parallel to 3.65v per cell. Built up two 8s packs and deployed them yesterday. System is working flawlessly. The charge difference between the packs at 90+amps total is 46.3 amps to the one pack and 47.2 amps to the other. Those numbers fluctuate, but never vary more than an amp. At much lower amp rates there is almost no variation. This tells me that the resistance of my parallel wiring set up AND possibly the internal resistance of the cells can not be too far off.

Over all, am very happy with the overall design as the "Hits" just keep coming. So many benefits to this design that I never really saw coming.
16 EVE 230Ah Cells put together in two 8s packs with 2 separate Overkill Solar BMS units, then paralleled to a master + and - busbar.
Benefits include but are not limited too:
So much Fun. Loving the design.

But hey, it is a 4" pipe with a 4" 12v computer fan on the inside controlled on a timer. It draws air in from under the house direct into the battery box. Here in FL the air under the house is much cooler in the Summer and Much warmer in the winter, so this set up keeps my batteries climate controlled all year round.

if you do not mind if i ask, does it get humid in there? nice setup

curiouscarbon said:
the diagram shows a way of utilizing the natural temperature difference and stuff

if you do not mind if i ask, does it get humid in there? nice setup
Click to expand...

The humidity is no worse ... Maybe better than the outside levels. But a lot of that is aided by the fact I have nearly 4 ft of crawl space height. So good air movement under the house

And yes, insurance companies "hate" Me for that. I don't think u can build an off grade (not grid) home to code anywhere in FL now.
You must log in or register to reply here.