How high is too high on PV voltage?

Important fact – my roof slopes East/West, so my plan was to run west strings to one PV input, and East side to the other. I had it in my head to try and put the same amount on each (no reason, just assumed it was the thing to do.) If I did 4S5P My voltage would be 163V or 204V on the coldest day, BUT I have no idea where to put the fifth string – east roof or west roof? I would rather do the 5

I’m new to all of this, so yell if math is wrong, I used wrong numbers, or if there is a better idea. We plan to only be in this house for another 3.5 years, and mostly sized everything just to keep the heat on and the water running.

You NEVER exceed the PV voltage input limit. 247V is within limits, but you have very little margin. It's really up to you if you want to take the risk.

You could have 4S2P and 4S3P on the two inputs. Provided you can orient the 5th string panels all in the same direction, it shouldn't affect your total power substantially provided the MPPT can accept the increased input current. If your weather patterns favor clouds in the afternoon, it might benefit you to have 12 on the East and 8 on the West.

You could even split the 5th string with half on each face. This will impact production in full sun limiting the performance to the "weaker" half, but in overcast conditions, the impact is less severe since they're not getting direct sun anyway.

The Midnite Classic charge controllers have a 'Hyper-Voc' feature for this issue - but they're the only ones I know of. Agree with @sunshing_eggo - do NOT risk having voltage exceed the max Charge Controller limit and the temps you describe definitely have the potential cause VoC to raise significantly.

I don't see much issue with shorter strings (lower voltage) + more in parallel to mitigate this risk - its the same power either way as long as MPPT voltage is high enough to charge the batteries and overall power is within specs.
Last edited: Oct 30, 2021

Not clear from manual/specs if it has two MPPT circuits (each getting PV from one input), or a single MPPT circuit and happens to have two PV connections.


If a single MPPT, your two orientations of PV string are connected in parallel, must be same length (voltage).
If two MPPT, I like to feed each MPPT two PV strings of different orientations. That reduces peak current, extends hours of operation.

I think it can be done, but it will be pretty close. I don't know exact about Growatt, but specs vary depending on manufacturer.

Some do specify rather conservative limits, and aren't instantly fried when applying 1V more, others might be different..

also, i've seen some manufacturers specifying ther max Voc based on 25c, and do actually allow higher voltages. (since not everyone is familar with the temp coefficient parameter of panels they just specify eg 200V max, with a small note of 'up to 230V based on a panel with a coefficient of *)

Ideally, you should plan for your coldest morning, here's a voltage correction table to calculate the theoretical open circuit voltage at the crack of dawn on an icy morning. 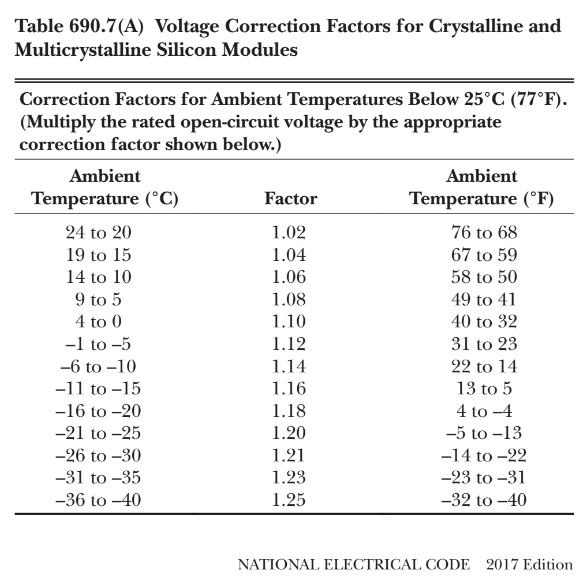 Do yourself a favor, don't mess around with this.

I doubt at 260 or even 270 volts there will be any smoke or damage. HOWEVER, you shouldn't go over the manufacture's ratings and some MPPT equipment tracks max voltage seen in memory, so it could void your warrantee.

I say do it and if it ever looks like your are going to get below -20, disconnect the array from the MPPT until it warms up a bit. Long as you understand the risk and can do without solar charging while it's below -20, you will be fine.

Something else to consider is It will never go over while operating, its if the load is disconnected while that cold "open circuit" that will get you.
J

I ended up going with slightly lower voltage panels. Also, to be on the safe side, I used a correction factor of 1.25.

The specs for your panel give the actual "correction factor". Look at the specs and find the "Temperature Coefficient Voc". It will be something close to -0.3%/ºC.

About voltage; I've opened up a few Asian based 'high end audio' pieces only to see caps with ratings stamped on them that were less that the voltage being fed to them. Maybe this is what makes me nervous running voltage near a piece of equipment's limit, especially when the inside parts are an unknown.
M

Mr-Sandman said:
I say do it and if it ever looks like your are going to get below -20, disconnect the array from the MPPT until it warms up a bit. Long as you understand the risk and can do without solar charging while it's below -20, you will be fine.
Click to expand...

Mr. Murphy thinks this is a bad idea.
You must log in or register to reply here.

J
PV too high after install

M
Average or summation from PV ?
2