I looked around for a suitable manual tilt mechanism for a portable solar panel and didn't find anything suitable. Most of what I found was too small for my full size panels which weigh 44 lbs each, with dimensions of 66" L x 39" W x 1.5" D (1676mm x 1008mm x 40mm). Yes, these panels are far from ideal for portable deployment, but they match the two on the roof and I got a good local deal on them (no shipping). I have room to store them in my RV trailer that is out of the way and secure.

For the prototype frame, I bought 1"x2" T6061 aluminum that is 1/8" thick. My goal was to create a tilting frame that could be used to secure the panel to the ground and handle high wind gusts. Most of the supplies I used for this project were not optimal, but were what I had on hand.

The four length of rectangular aluminum are joined together using aluminum brazing. I used a Bernzomatic TS8000 MAP-Pro brazing torch from Home Depot along with Bernzomatic Aluminum Brazing Rods, also from Home Depot. This is a shade tree mechanics alternative to real welding. The thickness of the aluminum requires a good two minutes to get to the right temperature before the brazing rod will melt into the joint. There are plenty of videos on YouTube on how to do this. Look up the channel "See Jane Drill". She makes it look easy and for the most part it is.

The poles came from a Kelty Noah's Tarp. Originally the poles had four sections. I took them apart and used just two sections, adding holes as needed. I used a CAD program to figure out how long the poles needed to extend to support a winter angle for the panel as well as the minimum angle for the summer. Getting the minimum angle may require locating the foot of the pole outside the frame. I didn't want to cut the poles to a shorter length.

The elastic cords are temporary. I'm either going to use an adjustable bungee cord or a non-ratcheting 1" cam buckle strap.

There are four cabinet hinges used at the bottom of the panel.

When lowered down, the bracket that the tip of the pole comes up through is almost flush with the aluminum frame.

A closeup of one of the brazed joints. It may look like the aluminum pieces aren't touching, but they are. The edges were beveled to give the braze more metal to work with. 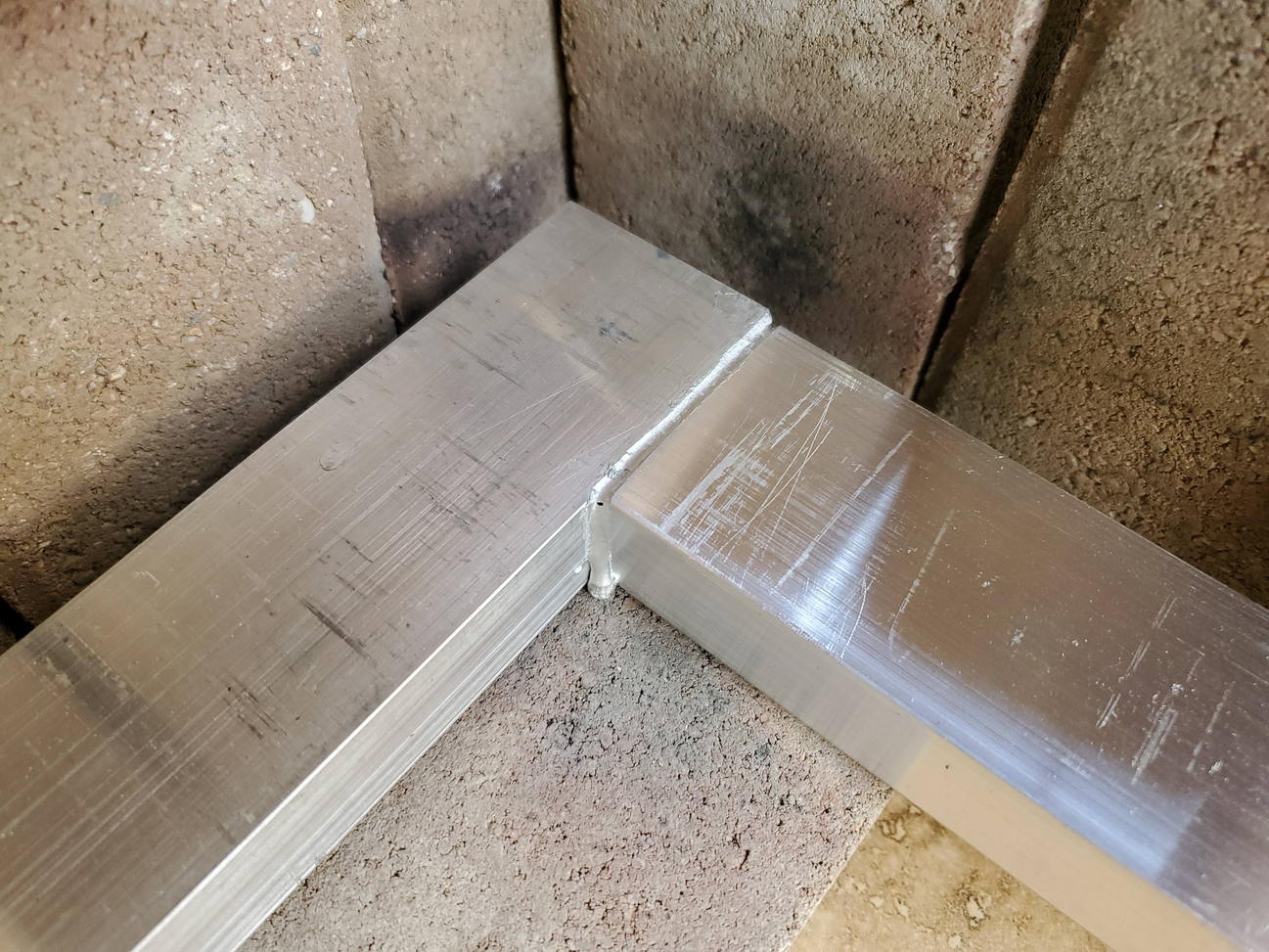 The original plan to secure the frame to the ground was to drill four holes in the frame and run spikes or lag bolts through the holes. I'm rethinking that. I became a bit uncomfortable with swinging a hammer a couple inches from my solar panel. I may attach paracord to the frame and run the spike or lag bolt through a loop of the paracord about 6" away from the frame.

The next frame (I have two portable panels) will be different.

Going to add wheels and a handle?

Tie-down points in the yard?

You know those rubber bumpers to protect cell phones when they get dropped? Might be a good idea to do something like that ...

I got lucky the time my pair of AP120 on an easel blew over and took out the gas meter. It is tied to stakes now.

"Brazing" aluminum - I might have tried once, must not have done it right. I kind of regret dropping out the the bidding on a Snap-on TIG setup.

Hedges said:
Going to add wheels and a handle?

Tie-down points in the yard?

You know those rubber bumpers to protect cell phones when they get dropped? Might be a good idea to do something like that ...

I got lucky the time my pair of AP120 on an easel blew over and took out the gas meter. It is tied to stakes now.

"Brazing" aluminum - I might have tried once, must not have done it right. I kind of regret dropping out the the bidding on a Snap-on TIG setup.
Click to expand...

No wheels. I can carry it - for now. Any bulk I add to it would make it difficult to store in the trailer.

It will definitely be secured to the ground. The winds in Wyoming can be brutal.

I've wanted to learn to weld for a long time. I'm going to take the class first and see what the experts suggest for a welder.

I bailed on the brazed joints. They were starting to show signs of stress. I need these frames ready for field deployment this week, so I didn't have time to find someone to weld them for me or for me to take a class, talk the wife into buying $1,000+ worth of welding equipment and practicing until I could produce a bead worth showing to the world.

I put on some 1/8" thick plates to shore up the corners. Both sides of the frame have plates. Eight plates for the frame. It's very solid.

Also shown in the picture below is a hole - to the right of the plate - to put lag bolt to secure the frame to the ground as well as a bolt in the bracket where the orange tilt pole goes - just below the plate. I drilled a hole in the frame and then ran a 1/4" tap to provide threads for the 1/4" bolt seen in the picture. This is how I'm keeping the solar panel from flopping out of the frame when I'm carrying or storing it.

Doesn't a guy your age know to have multiple offshore bank accounts, untraceable by your significant other?

(We have his, hers, and ours accounts. She doesn't know everything I've bought.)

One account for both of us. It seems that all my hobbies make noise and none of them are inexpensive. When I said I was signed up to take a welding class she didn't focus on the cost of equipment. Instead, she asked where I was going to keep it.
You must log in or register to reply here.

What’s the name of this style of mounting clip?

How To: Mount Panels to an RV Roof