I have an all electric house.
Several years ago I built a UPS for my refrigerator with a Cotek 24V inverter and charger. I used several relays directing the output so it would maintain the batteries when on grid power then auto failover to the inverter when there was a power outage. It provided about 24 hours of backup, and had an input for a generator to refresh the batteries.
The goal was to keep the refrigerator running if there was an outage while we were away, and to be able to run the refrigerator at night during an extended power outage so we didn't have to keep the backup generator running all night.

I spliced a twist lock outlet and corded plug inline the refrigerator circuit.
The circuit travels from the breaker to an outlet, then the corded side connects to the wiring running to the refrigerator.
I can either plug in to the outlet, running straight off the grid, or place the UPS in between the outlet and plug and have utility power and battery backup.
I'm using twistlocks specifically so they can't be knocked loose.

I recently replaced the contraption with a Growatt 3000. I reused the LiFePo4 battery.
The new install is a lot cleaner, takes up less room, has higher utility charging capacity, is programmable for lithium batteries, and has PV charging option. So in an emergency I can set up the panels I have and keep the fridge running indefinitely.
I was able to install it in an out of the way corner in my garage.
I also included a derived load center with separate input and output circuit protection, and have a second outlet for a small fridge in the garage. 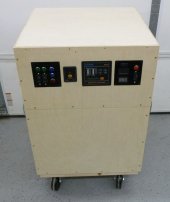 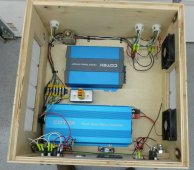 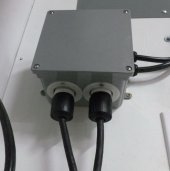 How does the higher idle power draw of the Growatt impact the backup time?
D

I got ~32 hours until exhaustion in my test. I have a 24V 190Ah LiFePo4 battery now.
Once the inverter kicks on to supply the load, the efficiency increases.
I haven't seen much problem, but haven't metered it. It's doing what I want it to.

I need to do a long term, like over the weekend, test with solar only.
I have two 150W panels I hook up in series to feed it.
I need a couple larger panels to get by in Winter.
The fridge consumes around 2.4kWH per day.

Playing with this thing makes me want to permanently mount an array and run full time on solar with utility as backup.
D

Much higher WAF now too!

300W of panels will be insufficient to provide indefinite backup power as that will only get you 1.5kWh/day with good sun. Likely need 900W of solar if you plan to use it for indefinite fridge backup.
D

That's what I think I calculated. 1KW min, which is what started me thinking of a permanent array.

I've built a couple smaller systems for camping.
I have a 54Qt 12VDC fridge and a 280AH 12V lithium battery. I run one of those 150W panels indefinitely. The fridge will run 5 days on the battery alone.
You must log in or register to reply here.

R
From Growatt to Victron Energy
2

How do I set my Growatt SPF 3000TL LVM to not drain my battery to zero?