If I do I assume I set the charger at 14.4V, max the amps out at 10 and wait until the amps get to zero. I don't set it to the individual 3.6V for each cell in each battery? I bought this power supply (will used it)

If you arrange the cells in parallel, you better not charge them over 3.65V.

The question as to whether you need to top balance should revolve around how closely the cells voltages remained as the battery was charged to 14.4V. Did you monitor the cells during charging?

EDIT: After pondering my response, i am guessing i am not understanding what you are trying to do. Since you have non-DIY batteries, i am guessing you cannot arrange the cells in parallel so my "3.65V" comment would be moot.

If you are talking about balancing your batteries with one another (NOT what we here refer to as "top balancing"... normally), its probably not necessary if you've charged them all up similarly.

If you can't monitor individual cell voltage for your EXPERT POWER BATTERIES, I would forgo the top balancing. I doubt most pre-built lithium BMSs would let you have great monitoring.

To me top balancing implies individual cells are balanced at 3.6 or 3.65. Unless the battery spec sheet says charge to 14.4, which is an average of 3.6 per cell, I would not want to charge them that high. Just looking at the battery terminals at 14.4 tells me the average voltage is 3.6, but one cell could be 3.5 and the other 3.7 (Overvoltage) and the sum voltage would still be 14.4.

What I would do for the batteries, is make sure each battery is charged to the same State of Charge Before hooking them together. I'd charge one battery at a time, without putting any load on the battery until all four are done. Check voltages to make sure it's the same, and then put all four in parallel. I think this is called battery balancing and not top balancing.

Since the are batteries complete with bms and not cells its difficult to get them all "top balanced".
If one of the batteries BMS disconnects it will stop charging.
You don't have access to the cells individually so I suggest charging each battery individually to 14.4 volts.
If they all get to 14.4 without tripping a bms then call em good and assemble into your 2s2p configuration.
If one or more BMS trips then you may have a problem.
In that case I would suggest contacting the vendor.

If somewhere down the road the batteries are causing grief you can use a couple of these to keep them balanced. 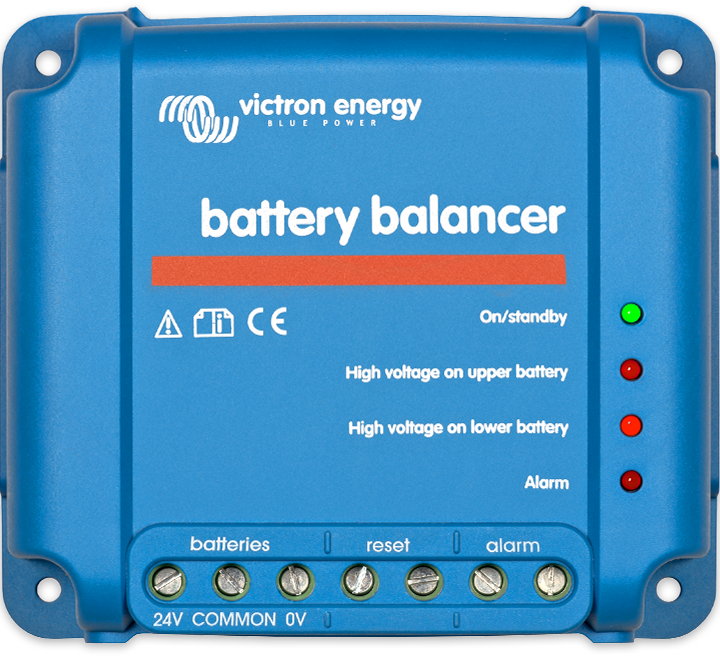 Equalize the state of charge of two series connected 12V batteries using the Battery Balancer. Find a Victron Energy dealer near you.

I wouldn't spend the money until if/when the problem materializes.
S

On an individual level, each bms has it's own bleeder / balancer which you don't have access to handle top-balance. Successive charge cycles will get each one the closest it can.

I think you may be overthinking this with the lab-charger on batts you don't have internal access to, but nevertheless ...

You might want to know that their own 20A lifepo4 charger reaches 14.4v, holds it there, and as the CV/tail curent drops, it stops charge when that current drops to 2.5A (about .025C for a 100ah batt). It doesn't charge until zero current, as that adds unnecessary time at full charge for very little benefit.

You may want to emulate that with your programmable charger if you enter into some sort of claim. Ie, stop charge at .025C current bank total. For a 400ah total bank, that would be about 10A to stop at!

Personally, with these types of batts, I think the lab charger is an unnecessary complication as long as you've connected the batts with a nearly equal level of full charge to begin with - and let the internal bleeders mop up any small differences.

PittsburghRed said:
So I just got 4 new expert power 12V 100ah LiFEPO4 batteries. I used a 20 amp charger and got them all up to 14.4V (max charge). I am monitoring them as they drift down.

Either way, you don't do any top balancing.

If you are going 4P for a 12V system then simply charge each battery to 100% and then put them in parallel for use. Done.

PittsburghRed said:
So I just got 4 new expert power 12V 100ah LiFEPO4 batteries. I used a 20 amp charger and got them all up to 14.4V (max charge). I am monitoring them as they drift down.

If I do I assume I set the charger at 14.4V, max the amps out at 10 and wait until the amps get to zero. I don't set it to the individual 3.6V for each cell in each battery? I bought this power supply (will used it)

Yes. connect all 12v batteries to each other, positive to positive, negative to negative (parallel).
Then connect your 12v charger. Positive lead to positive battery terminal. Negative lead to Opposite side Negative terminal of the battery.
Charge

after you finish charging. All batteries will be "Matched". Now you can series/Parallel connect them for your application.

I plan to install these as 2s2P.

rmaddy / Nbtesh, would I set the power supply at 12v or 14.4V? Most balancing seems to be max not nominal?

PittsburghRed said:
I plan to install these as 2s2P.

rmaddy / Nbtesh, would I set the power supply at 12v or 14.4V? Most balancing seems to be max not nominal?
Click to expand...

I guess you are just looking for second opinion because I already covered this
https://diysolarforum.com/threads/t...12v-100ah-lifepo4-batteries.39173/post-495452
P

Smooth I missed your post, so you recommend the victron balancer? I was looking at this as the solution. For $65 bucks you think its a good way to go?

Not unless you really need it.

Another option is to sell your batteries and get 24 volt batteries.
P

If I bought more stuff the wife would lynch me!
7

Isn’t that part of the game? Always push the boundaries.
T

The batteries charged individually to 14.40 volts are all balanced. Put them in service. Check and compare the voltages at top charge after 10 regular cycles. Post the results.
S

Take a tip from Will: If you are pulling rated capacity from those batteries, then you are done.

PittsburghRed said:
If I bought more stuff the wife would lynch me!
Click to expand...

So you went out and bought a new inverter?
P

The Victron Battery Balancer is aimed primarily at the lead acid market, and specifically for those who don't have the ability to individually charge each battery with a 12v charger in their 24 volt system initially.

It is also intended as a band-aid for those who may be series connecting mis-matched pairs of lead acid batteries slapped together ala-carte.

Note in their manual they are addressing the problems of battery balance being a concern not only of bad initial performance, but also that of sulfation from undercharge, and gassing from overcharge - again primarily aimed at lead-acid. And if my eyes don't deceive me, all those batts in the manual appear to be sealed VRLA (agm).

Here, the author is using two nearly identical quality LiFePO4, who has the ability to charge each one up individually prior to series-connection, and quibbling over meaningless differences in balance between these units - which may only appear if you take then down to 99.9% capacity such as in an EV application. Which is not the case here.

If one bms is tripping, then you figure out why and fix it. Unless of course you are using mismatched trash. This kind of shade-tree advice goes along with those who promote not needing a solar controller, and just letting the bms trip upon full charge.

Basically the author is putting needless amounts of additional points-of-failure into his system, obsessing over differences which he'll never encounter in his application, which in the LONG run, do more harm than good.

Where this would be useful is if
1) You don't have the ability to charge individually first
2) You are in the habit of slapping together batteries that are mismatched in age, capacity, overall health etc.
3) You are band-aiding other problems such as poor infrastructure maintenance, cleanliness and so forth.

Just beware of those who try to hawk products for the balance-obsessed, where in the long run, trying to get your voltages exactly equal all the time (within reason), which may have zero effect on your actual ability to draw the expected capacity from them abound. *MINOR* differences are to be expected given there are very minor differences in manufacturing and even bms bleeder resistor tolerance.

Putting this is on two nearly identical Sol-Ark's, previously charged individually - are you kidding me?

It's a nice product for those that need it. For specific reasons. But to promote in the way he did is just hawking "stuff" for a system that doesn't need it - the way he built it.

So NO, I will NOT "like" so you can get more free stuff to slap together.
Last edited: May 5, 2022
You must log in or register to reply here.